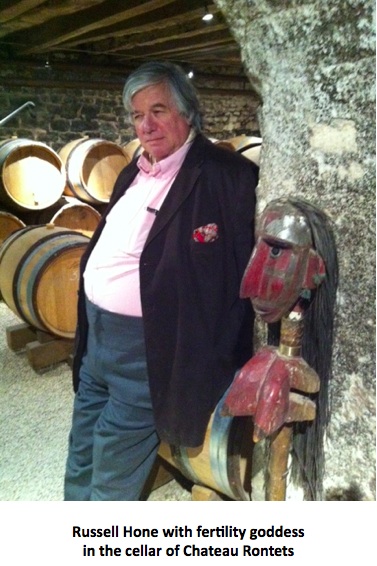 Just back from Burgundy. Yeah, I know, sounds great. If I had a bottle of La Tache for every person who’s said how lucky I am to get paid to taste wines in places like Napa and Bordeaux and Burgundy I’d be one very happy wino, but the reality of the wine writer’s job—even a part timer like myself—is not necessarily as glamorous as it sounds. Sometimes you wake up in the morning in your rented apartment in Beaune with a little bit of a mal de tete, (aka a gueiles de bois) and that handheld shower thing is not really working and you stop at the café and grab a really bad coffee, which is pretty much the only kind they have in France, and a really good croissant, (though there are bad ones too) before driving up to Nuits St. Georges to taste and spit wine in a really cold cellar at 9:30 AM. Or you find yourself tromping a vineyard in the rain and wonder if your feet will ever be warm and dry again.

On this recent trip I was accompanied once again by my friends Beaver Truax and David Russell, wine retailers from New York and Berkeley, respectively. This was David’s 33rd trip to Burgundy and Beav has been about half as many times, so I appreciate their perspective—this being only my fifth trip to the Cote d’Or. I rendezvous with David in Paris and take the train to Beane; early the next morning we wake and drive to the Macon with Beav and Russell Hone, the great gourmand/Burgundy expert who co-wrote a series of cookbooks with the late Richard Olney and has long been married to, and worked with, Becky Wasserman, the American born fairy godmother of Burgundy. (Also with us, Whitney Woodham, a firecracker Alababaman who works for Dominique Lafon in Meursault.)

The Macon doesn’t really get much respect but it’s increasingly worthy of attention as a source of relatively inexpensive white Burgundy and given how expensive, and increasingly unreliable white burg from the Cotes de Beaune has become I wanted to explore it. Unfortunately though, it was about forty degress outside and raining when we arrived at our first appointment to meet the winemaker at Dominique Lafon’s Hertiers de Lafon domain and tour his vineyard in the town of Chardonnay. That’s right, Chardonnay, possibly the birthplace of the grape.

After ten minutes I was soaked, my boots were caked with mud and that was pretty much how I stayed the rest of the day. We tasted at Lafon after that, sniffing and spitting, then rolled out for our next appointment. At four o’clock, after a somewhat revivifying meal at Olivier Merlin’s house, during which I tried to warm up in front of a feeble fire made out of grape vines, we arrived at our third appointment, Chateau Soufrandiere, to discover a lineup of some 25 wines waiting to be tasted. All I wanted to do was take a nap, preferably in a hot tub, and in fact Russell stayed in the car with the heater on and did just that. But duty called. If the wines hadn’t been excellent, and the three diminutive, hyperactive Bret Brothers hadn’t been so excited, I think I would given up half way through. But tasting wines like these is why we bother. Still, we are relieved to finally say goodbye and further relieved when our hosts at our next stop, Domaine Rontet, tell us that they only have three cuvees. But first we tour their vineyards which are on top of a hill overlooking Pouilly, and the wind is howling and the feet are further soaked. These Burgundian vignerorns love you to see their vineyards. But the wines, once again, two Pouilly Fuisses and one Saint Amour, are very good, as is the dinner that our host and hostess Fabio and Claire prepare later in the eighteenth century chateau for our weary band and all the winemakers we visited earlier in the day. We drink a lot of fine Macon and Beaujolais, and top it off with some 75 year old Calvados brought by Russell. It was a great night, although as I flopped into bed at a nearby bed and breakfast, too tired even to read another chapter of J.G. Ballard’s Cocaine Nights, the thought that I had four appointments the following day in Beaujolais was somewhat daunting.