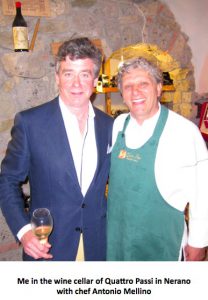 Spending a week on the Amalfi coast in June is pretty much my idea of nirvana, but I’m a little depressed about the fact that in all that time and despite a twenty-hour layover in Naples I had only one pizza. And strangely enough it was at a Michelin one star restaurant in Positano, in the San Pietro hotel. But damn was it good, much better than the wood-grilled dorade for which I had high hopes—the only disappointing fish I had on the trip, strangely flavorless, possibly not entirely fresh. The view almost made up for it though—we were perched on a cliff about five hundred feet over the Mediterranean. The wine was good, too: I was drinking from a mag of 2001 Terre di Lavoro—tried to drink locally while there, and there are some great reds in