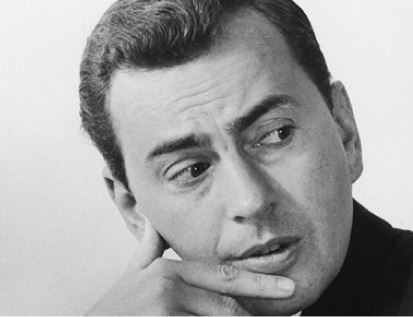 The last time I saw Gore Vidal was at a book fair in Austin a few years ago, and I was saddened to see him in a wheelchair, looking terribly shrunken. I prefer to remember the night of our first meeting at his grand apartment in Rome, where I was spending a week promoting the Italian publication of Bright Lights, Big City. At that time we shared an editor, Gary Fisketjon, and Gore had invited me to dinner when he heard through Gary that I was coming to Rome. The first time I ever met him was when he answered the door, and while I’d seen him often on television I wasn’t prepared for the scale of the man—he was tall and broad and he seemed more like a movie star than an author. Even before he opened his mouth he was impressive, and the voice was also powerful—like a Shakespearean actor’s voice, coming from deep in his chest. He seemed to combine chiseled enunciation with a hint of a drawl. His eyebrows appeared always to be on the verge of rising to express skepticism and there was always the lurking suspicion of a sneer. He was tremendously funny, and courtly, and entertaining. Among the other guests was a very pretty English girl who worked for Valentino whom he later informed me, taking me aside, that he had invited her for my benefit—implying that he was aware of my boring heterosexual proclivities. And indeed we hit it off, though the most vivid person at the table was Vidal.

The living room and the dining room had magnificent views of the Pantheon, the dome of which seemed to be floating just outside the windows. We had a rather spirited argument that night, about whether or not The Last Tycoon, Fitzgerald’s unfinished final novel, had the potential for greatness. I thought it did. He thought not. His argument was that Irving Thalberg, the model for Fitzgerald’s Monroe Stahr, was not a great or a heroic figure in the flesh. I argued that this was utterly irrelevant, that the whole point of fiction was to transform the raw ingredients of daily life, to interpret and give shape and meaning to the flux of events. Irving Thalberg was just a starting point, the clay for Fitzgerald’s mythic imagination. He declared it a failed roman a clef. It was a little scary arguing with Vidal, who was brilliant and scathing and extraordinarily erudite, but also exhilarating. And of course cocktails helped. The argument got pretty warm but somehow never got nasty. In retrospect I can see that most of the novels that Gore wrote were historical. As brilliantly animated as they were—I love Gore, Lincoln, Julian and Washington DC—they were ultimately circumscribed by the historical record, by the biographies of their protagonists. There were no Gatsby’s in his fiction, no mythical creatures.

In his review of Michael Gorra’s Portrait of a Novel in this weekend’s Wall Street Journal, Colm Toibin makes the point I was trying to press all those years ago in talking about how Henry James created the character of Isabel Archer. “Although Mr. Gorra realizes how much use Henry James made of his cousin Minnie Temple in the creation of Isabel…he does Henry James the justice of recognizing that, in the making of the novel, there was artistry at work rather than representation.” I’m pretty certain I didn’t sway Vidal—I’m not sure anyone ever did—but I had a good time trying.

Vidal’s companion, Howard Austen, had the flu that night and wasn’t among the party that night, though he made a brief appearance. This was 1986, in the early days of the AIDS crisis and the subject inevitably came up. I had just had lunch in Milan with a fashion designer whose boyfriend had recently died, reportedly of AIDs, and when Gore asked me how the designer was, I’d said that he seemed to be very healthy. “Why wouldn’t he be?” asked Gore. And I said that given the death of his companion, one couldn’t help but worry about the health of the surviving half of the couple. He laughed at my apparent naivety. “My dear boy,” he said, “don’t you realize, there are pitchers and there are catchers.” And later, when Howard appeared briefly at the door of the dining room, honking and sniffling, to wave to us, Gore said, “Behold, the catcher.” A little harsh. And in retrospect, a little naïve, not usually a word associated with Vidal. But very Gore. We ended the night on very matey terms, friendly enough to arrange a rendezvous in New York.

I left very late, not very sober, and I had to go back to his apartment the next morning to collect my wallet, which I’d left behind. When he opened the door he looked a little the worse for wear himself. “Welcome,” he said, “to this special meeting of the central Rome chapter of Alcoholics Anonymous.”

I had a couple of very stimulating encounters with him and several more arguments with him, the last one I remember about being about Norman Mailer’s fiction over dinner at Daniel, although for some reason our first encounter remains the most vivid. When Mailer died in 2007 Vidal became the last man standing in that triumvirate of postwar literary celebrities that included Mailer and Truman Capote, two gay men and one hyper macho heterosexual who were at least as well known for their non-fiction and for their public personae as for their novels. In the forties and the fifties, the great America novel was the big white whale of the landscape of letters, but in the end Capote will certainly be best remembered for In Cold Blood, his non-fiction account of a quadruple murder and Mailer’s legacy seems divided; non fiction books like Armies of the Night and The Executioner’s Song may be more durable than An American Dream and The Deer Park. Like Vidal, he was obsessed with American history and politics and much of his fictional creation takes place within the interstices of historical events and characters. As for Vidal, it’s the essays I’m going to return to now—those pithy, bitchy, shapely, elegant and erudite jeremiads that sound just like the man himself, berating and instructing his slightly misguided, less intelligent listeners. I don’t always agree, but I’m always impressed, even dazzled.