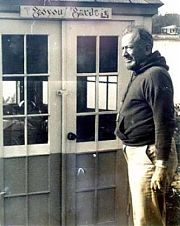 Back to work on the novel after a hiatus. I work in the mornings and later in the afternoon I either go to the ocean to swim or the bay to paddleboard. My house in Sag Harbor is on Upper Cove, and about mile down the shore is the house where John Steinbeck spent much of the last two and a half decades of his life. It’s a beautiful property, a peninsula shaded by oaks. The current owner called me up last year and kindly offered a tour and a cocktail. The house itself is a modest mid century two-bedroom which has most of Steinbeck’s furnishing and books intact. He wrote The Winter of Our Discontent here, in a little hexagonal hut perched above the water, and watched the ospreys, who infuriated him by failing to use the nest he built on his property, instead nesting across the cove. I too have built an osprey platform on a twenty-foot post at the end of my dock, but the ospreys have so far spurned it, although they seem to be thriving. I see one or two every day that I’m on the water, and sometimes they use the nesting platform to devour a fish they’ve plucked from the cove.

Sag Harbor has long attracted writers; James Fenimore Cooper spent a few seasons here, dabbling in the whaling business when it was the second busiest whaling port on the eastern seaboard. Nelson Algren spent his later years here, just down the road from Canio’s Bookstore. (Until recently we had three bookstores but I think we’re down to two with the closing of the second-hand bookstore just off Main Street) Thomas Harrison created Hannibal Lecter during here and is still rumored to be in the vicinity. Alan Furst also lives in Sag Harbor and E.L. Doctorow lives just a few doors down the road from me. Haven’t seen Colson Whitehead around though he spent his childhood summers here, and reimagined them very memorably in his novel “Sag Harbor.” Jason Epstein, who pretty much invented the trade paperback book, and founded the New York Review of Books and rare book dealer Glenn Horowitz lend extra literary cachet.

For many years Sag attracted the literati in part because it was cheaper and scruffier than the other hamlets of the Hamptons, and Main Street is still a Ralph Lauren free zone, a place where merchants stay open on Halloween night to give out candy to trick or treaters. The illusion of Mayberry RFD on the sea survives for the moment, although real estate prices continue to escalate and the old Bulova Watch factory, abandoned for decades is being renovated and turned into luxury condos by my friend Curtis Bashaw. I toured the building with him recently and I have no doubt the results will be spectacular. But it represents a continuing trend of gentrification which will make harder to pretend that Sag Harbor is still a blue-collar town with resident writers.

In the meantime, though, Bob Hand is still carving his award-winning decoys out of his home on Madison Street. I just bought a pair of canvasback ducks from him and I have commissioned a redtail hawk, which should be ready this fall. Bob carved a loon for Doctorow in honor of his novel Loon Lake some years ago, and he is pleased to show visitors the picture of it in a yellowing copy of People magazine. You can see his work on display in his windows as you drive past.