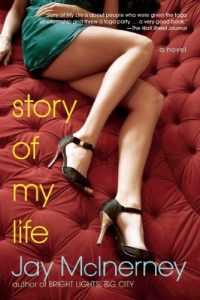 In his breathlessly paced new novel Jay McInerney revisits the nocturnal New York of Bright Lights, Big City. Alison Poole, twenty going on 40,000, is a budding actress already fatally well versed in hopping the clubs, shopping Chanel falling in and out of, lust, and abusing other people’s credit cards. As Alison races toward emotional breakdown, McInerney gives us a hilarious yet oddly touching portrait of a postmodern Holly Golightly coming to terms with a world in which everything is permitted and nothing really matters.

Story of My Life was another narrative, like Bright Lights, that started out as a voice-driven short story, more of a riff than a story, really, and grew into a novel. When I started writing it I was dating a girl named Lisa Druck who was about ten years younger than me—she and her friends were all about twenty and they’d all arrived in New York recently; they knew each other from the hunters and jumpers riding circuit. I was fascinated by their speech, a kind of East Coast version of a dialect that was called Valley Girl speak. To me it had a certain poetry, a compelling rhythm and energy. I was also fascinated by the frankness with which they spoke about sex and men. Sometimes I found myself the only man in the room, late at night, and despite the fact that we were more than a little addled at such times I retained quite a bit of what I heard and used it in SOML.

I loved the idea of writing from a woman’s point of view. It was fascinating and hugely entertaining for me, turning the tables, imagining everything from the other side. Of course, I made it somewhat easy on myself by choosing as an alter ego someone who was young and somewhat limited in terms of her education. Alison Poole is one of my favorite characters. Apparently one of Bret Easton Ellis’s favorite characters, too—he has borrowed her for two of his novels. She makes an appearance in American Psycho, where she almost gets killed by Patrick Bateman. And she’s a major character in Glamorama.

My old girlfriend, Lisa Druck, who inspired the character of Alison, eventually changed her name to Rielle Hunter and gained notoriety under her new name as the mistress of presidential candidate John Edwards.

I wrote most of this book at Yaddo, the artists colony outside Saratoga Springs New York. As with Bright Lights, this came in a sustained burst; the first draft wrote itself in six weeks.