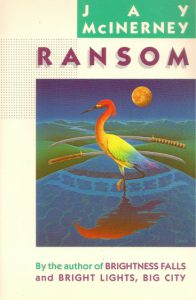 Ransom, Jay McInerney’s second novel, belongs to the distinguished tradition of novels about exile. Living in Kyoto, the ancient capital of Japan, Christopher Ransom seeks a purity and simplicity he could not find at home, and tries to exorcise the terror he encountered earlier in his travels—a blur of violence and death at the Khyber Pass. Ransom has managed to regain control, chiefly through the rigors of karate. Supporting himself by teaching English to eager Japanese businessmen, he finds company with impresario Miles Ryder and fellow expatriates whose headquarters is Buffalo Rome, a blues-bar that satisfies the hearty local appetite for Americana and accommodates the drifters pouring through Asia in the years immediately after the fall of Vietnam. Increasingly, Ransom and his circle are threatened, by everything they thought they had left behind, in a sequence of events whose consequences Ransom can forestall but cannot change. Jay McInerney details the pattern of adventure and disillusionment that leads Christopher Ransom toward an inevitable reckoning with his fate—in a novel of grand scale and serious implications.

Ransom was my second novel, published a year after Bright Lights, but in a sense it was my first. I started working on it in when I went to grad school at Syracuse and showed various chapters to Ray Carver and Toby Wolff and my fellow students. It was my expatriate novel, based on the two years I’d lived in Japan. Like my protagonist, I studied Karate while living in Kyoto. Ransom was partly an act of homage to writers like Robert Stone and Graham Greene and V.S. Naipaul. I was certainly under these and other influences, but I was struggling with the book for several years before I dropped it to write Bright Lights. Later, in the spring of 1984 I returned to the material and finally finished the book that summer just before Bright Lights was published.