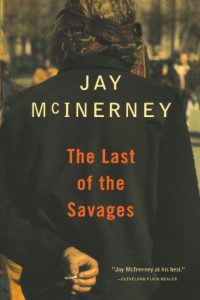 From the bestselling author of Bright Lights, Big City and Brightness Falls comes a chronicle of a generation, as enacted by two men who represent all the passions and extremes of the class of 1969. Patrick Keane and Will Savage meet at prep school at the beginning of the explosive ’60s. Over the next 30 years, they remain friends even as they pursue radically divergent destinies—and harbor secrets that defy rebellion and conformity.

The Last of the Savages is perhaps something of an anomaly—one of only two of my books set outside of Manhattan. In fact I wrote it while I was living part time outside of Nashville, Tennessee. I’d always been fascinated by the South, by Southern literature and Southern characters. In 1991 I married Helen Bransford, one of the more eccentric and fascinating people I’d ever met in my life, who came from old southern stock—from Charleston, South Carolina on her mother’s side and Nashville on her father’s side. At this point I was a little burned out after just barely surviving the eighties in New York so I ended up buying an old farmhouse in Franklin, Tennessee, and while we kept an apartment in the city, we spent at least half the year for the next five years in Tennessee.

The Last of the Savages was inspired in part by my love of the blues—while I was living in Tennessee I would frequently visit the Mississippi Delta, where I first met Matthew Johnson, the proprietor of Fat Possum records, which was dedicated to recording the last of the old Blues Artists. I ended up accompanying Matthew on some of his scouting expeditions. Matthew was the latest in a long line of white men—starting with Alan Lomax— knocking on the doors of shotgun shacks in search of talent and soul. (See my New Yorker profile of Matthew, “White Man at the Door”.) Will Savage, the protagonist of my novel, is one of those great entrepreneurial figures who brought the music of the American South to the world. He was partly inspired by two old boyfriends of Helen’s —Phil Walden of Capricorn Records and Issac Tigrett, who founded the Hard Rock Café and the House of Blues. Like many of my novels this one has had a long and tortured development career in Hollywood.