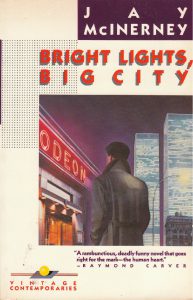 With the publication of Bright Lights, Big City in 1984, Jay McInerney became a literary sensation, heralded as the voice of a generation. The novel follows a young man, living in Manhattan as if he owned it, through nightclubs, fashion shows, editorial offices, and loft parties as he attempts to outstrip mortality and the recurring approach of dawn. With nothing but goodwill, controlled substances, and wit to sustain him in this anti-quest, he runs until he reaches his reckoning point, where he is forced to acknowledge loss and, possibly, to rediscover his better instincts. This remarkable novel of youth and New York remains one of the most beloved, imitated, and iconic novels in America.

In 1982 the Paris Review ran my first published story, “It’s Six A.M. Do You Know Where You Are.” It attracted a fair amount of attention in part because it was written in the second person, in part because of its explicit references to cocaine. It started life as a paragraph scrawled on a scrap of paper very early one morning after a disastrous night on the town. Many months later I found that scrap of paper and thought the voice was intriguing. I sat down and wrote a story about a guy in a nightclub who was not the kind of guy who would be at a nightclub at six in the morning -although he was. Much as I liked the story, I decided that there was more to tell and so a year later I picked it up again and set out to finish the story. I wrote the first draft in six weeks during the summer of 1983. When I told my best friend and future editor Gary Fisketjon what I was doing he said that he hoped I wasn’t trying to write an entire novel in the second person. I was too embarrassed to tell him that that was precisely what I was doing. I tried to rewrite the first chapter in both first and third person but something vital seemed to disappear and the prose seemed to go a little flat; I stuck with the second person and I have certainly never regretted it. It’s not a very versatile mode and I don’t recommend in general but I can’t imagine Bright Lights in any other voice.

This book changed my life. I was a grad student at Syracuse when I published it. Even before it came out I was flown to Hollywood to talk about screen rights. The success of the book was largely the result of word of mouth since we didn’t do any advertising and the early reviews were hardly rapturous, although I did get a very good one in the New York Review of Books. But a few months after publication my agent Binky Urban took me out and said “I’ve never seen anything like this. You may be living this book down for the rest of your life.” And she wasn’t far off the mark.

The movie came out in 1988 and while it did well, and I got sole screen credit, I can’t say that I’m fond of it. Somehow we failed to capture the energy and humor of the novel. Josh Schwartz re-optioned the rights from MGM and wrote a very good screenplay though his efforts to make the movie stalled when MGM went into bankruptcy. Stay tuned.

Bright Lights, Big City defined, and even determined, the mood of this whole town..
-- VANITY FAIR

Short, sleek and very funny…. Beneath it’s surface, though, a heart’s cry for a saner, sweeter, more thoughtful and restrained existence. .
-- CHICAGO TRIBUNE

Each generation needs its Manhattan novel, and many ache to write it. But it was McInerney who succeeded. .
-- NEW YORK TIMES BOOK REVIEW