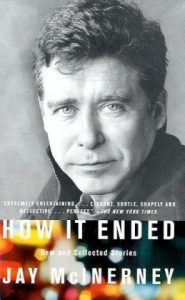 From the writer whose first novel, Bright Lights, Big City, defined a generation and whose seventh and most recent, The Good Life, was an acclaimed national best seller, a collection of stories new and old that trace the arc of his career over nearly three decades. In fact, the short story, as A. O. Scott wrote in The New York Times Book Review, shows “McInerney in full command of his gifts . . . These stories, with their bold, clean characterizations, their emphatic ironies and their disciplined adherence to sound storytelling principles, reminded me of, well, Fitzgerald and also of Hemingway—of classic stories like ‘Babylon Revisited’ and ‘The Short Happy Life of Francis Macomber.’ They are models of the form.”

Only seven of these stories have ever been collected in a book, but all twenty-six unveil and re-create the manic flux of our society. Whether set in New England, Los Angeles, New York or the South, they capture various stages of adulthood, from early to budding to entrenched to resentful: a young man confronting the class system at a summer resort; a young woman holed up in a remote cabin while her (married) boyfriend campaigns for the highest office of all; a couple whose experiments in sexuality cross every line imaginable; an actor visiting his wife in rehab; a doctor contending with both convicts and his own criminal past; a youthful socialite returning home to nurse her mother; an older one scheming for her next husband; a family celebrating the holidays while mired in loss year after year; even Russell and Corrine Calloway, whom we first met in McInerney’s novel Brightness Falls.

A manifold exploration of delusion, experience and transformation, these stories display a preeminent writer of our time at the very top of his form.

Like most novelists, I started out as a short story writer, and I’ve written stories throughout my career. I really love the form as a reader; as a writer I find it challenging, and daunting. Whereas in a novel you have room to fool around, a short story has to be a thoroughly economical and efficient mechanism. I started out writing poetry so the short story was a logical progression; I thought of the story as a poem with a linear narrative. My first and third novels started out as stories; sometimes they proved to be warmups to a larger narrative, but as often as not I found myself writing stories in between my novels.

After I finished The Good Life, I decided I wanted to write a collection of stories from scratch, really dedicate myself to the form and bear down on it. Between October of 2007 and May 2008 I wrote twelve new stories. I felt like I was on a roll, and I thought they would make an interesting book. But at some point I decided it might be interesting to collect all of my short stories in a single volume, a New and Collected volume. Possibly this was Gary Fisketjon’s idea. At any rate, he encouraged it and he managed to find in his own archives at least one story that I had completely forgotten, “In the Northwest Frontier Province,” which I wrote while I was studying with Raymond Carver and Tobias Wolff at Syracuse.

The book includes the twelve new stories and fourteen from earlier in my career. I have to say that in retrospect it turned out to be a very good idea to include the old stories, since the book got far more review attention than a slim volume of new stories would have, including the cover of the Times Book Review.